Arrested and Prosecuted for Accidental Exposure of Lawfully Carried Handgun

Dale Norman has a valid Florida Concealed Carry License but was arrested on February 19th, 2012 by the Fort Pierce, FL Police Dept. while otherwise lawfully carrying a handgun because it accidentally became exposed.

He is currently being prosecuted despite assurances made to the Florida Legislature in 2011 that police, prosecutors and Sheriffs would stop harassing people with concealed carry licenses for innocent accidental exposure of their handguns.

Dale was forced to the ground, a knee put in to his back, cuffed, booked, made to spend the night in jail, and is still (as of June 4th) being actively prosecuted for the criminal offence of carrying an unconcealed handgun all because his shirt got caught behind his holster while he was walking.

Florida and only 5 other state still make it a crime to carry an unconcealed handgun.  Most states don’t even require a license unless you conceal your handgun but Florida completely bans unconcealed or “open” carry even if you have a license to carry. 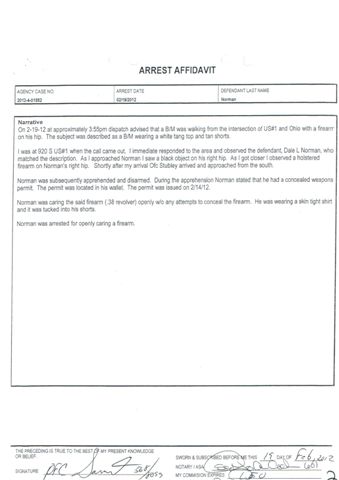 *** Update ***
Mr. Norman was found guilty of violating Florida’s Ban on Unconcealed Carry by a jury.  He has not been convicted though.  The Judge will be hearing motions to dismiss the case on July 31st, 2012.  Multiple motions challenge the ban on constitutional grounds.  More to follow.