The Springfield XD-S .45 delivers full-sized defensive capability in a tiny package.  It is shockingly tame in its recoil handling capabilities, and when launching 230gr .45ACP rounds from such a small and light gun, it has to be.  It looks like the MiB issued Will Smith the wrong weapon!

My first outing with the XDS didn’t go so well.  The slide stop on mine was out of spec and would not reliably lock the slide back on the last round.  A few turns around the internet showed that I was not alone.  The initial production batch of XDS pistols, it seems, were plagued by out of spec slide stop lugs and off-center strikes due to weak feeding of longer FMJ rounds.  An email to Springfield was all it took for them to send out the FedEx guy to pick up my gun for service.  Two weeks later I had my XDS, with its new slide stop, back home.  I am very pleased with how well Springfield takes care of its customers.

After a through cleaning, the slide stop issue is gone.  I have had a couple of FTF on FMJ rounds that get hung up on the top of the chamber.  A light smack on the back of the slide chambers the round.  The first time this happened I then ejected the round and could see that it was longer than my other ammo.  I just stuck in back in the mag and it chambered fine the second time.  The second FTF was not really an FTF.  It was just a slow-motion feed.  If you’ve spent much time behind the trigger, you’ve seen this.  It’s where the round hangs up a bit initially but then goes in to the chamber.  While holding the gun this 1/2 second to feed looks like an eternity.  JHP are immune to the XDS’s long round cambering geometry issue so I’m happy with it as my primary EDC.

There have always been small guns chambered in heavier calibers.  There have been .357 Magnum air-weight revolvers and derringers, the AMT Backup .45 during the 90’s, and many other metal mighty mouse guns.  The Tactical Tupperware has only gone in to this realm in fits and starts until recently.

In 2000 Glock introduced the model 36.  Their “slimline” .45 caliber compact made for the American market. 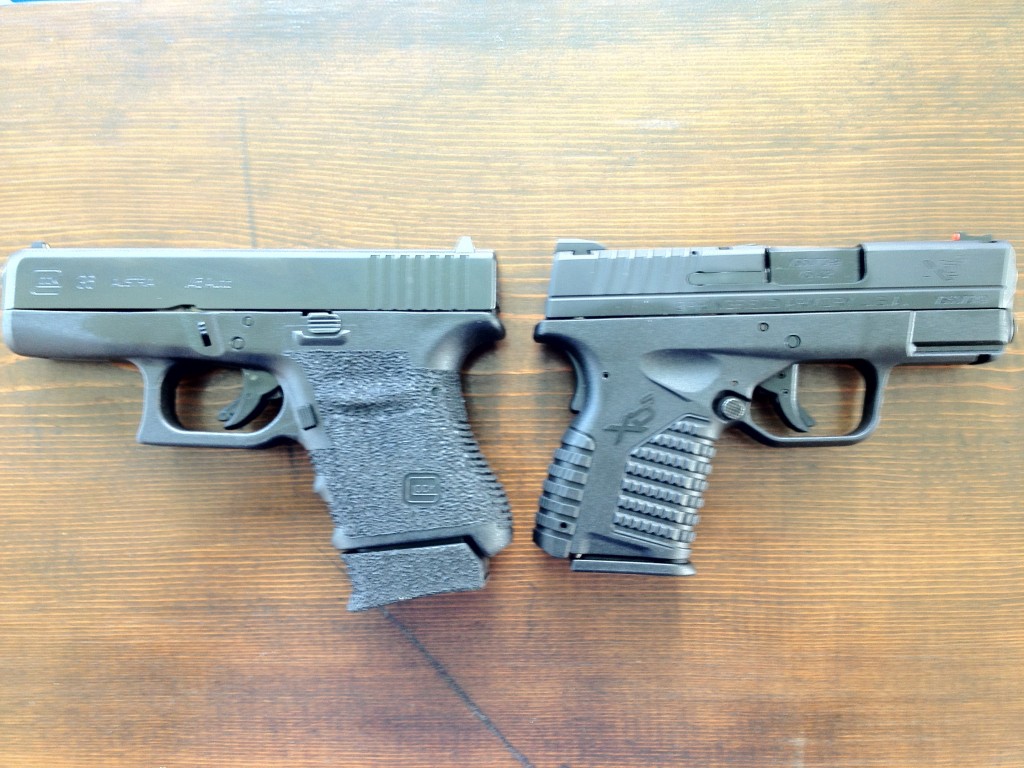 Often called a single-stack, this is really a misnomer.  The G36 6-round mag uses an offset column that is about the same width as most double stack 9mm and .40 standard capacity offerings. 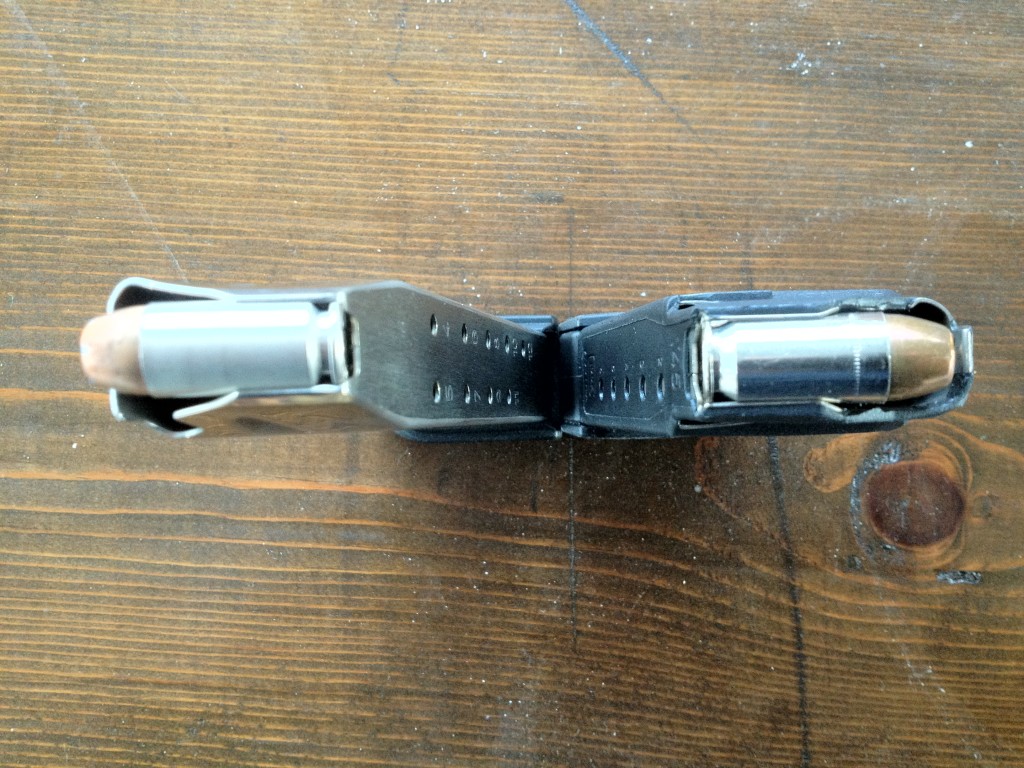 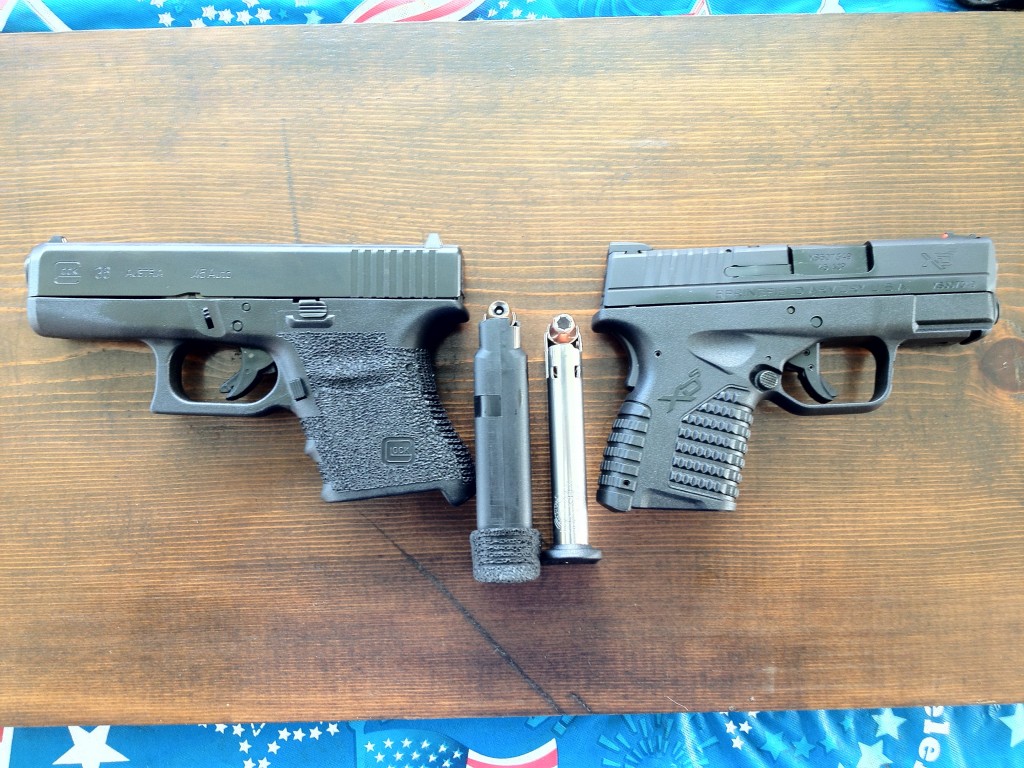 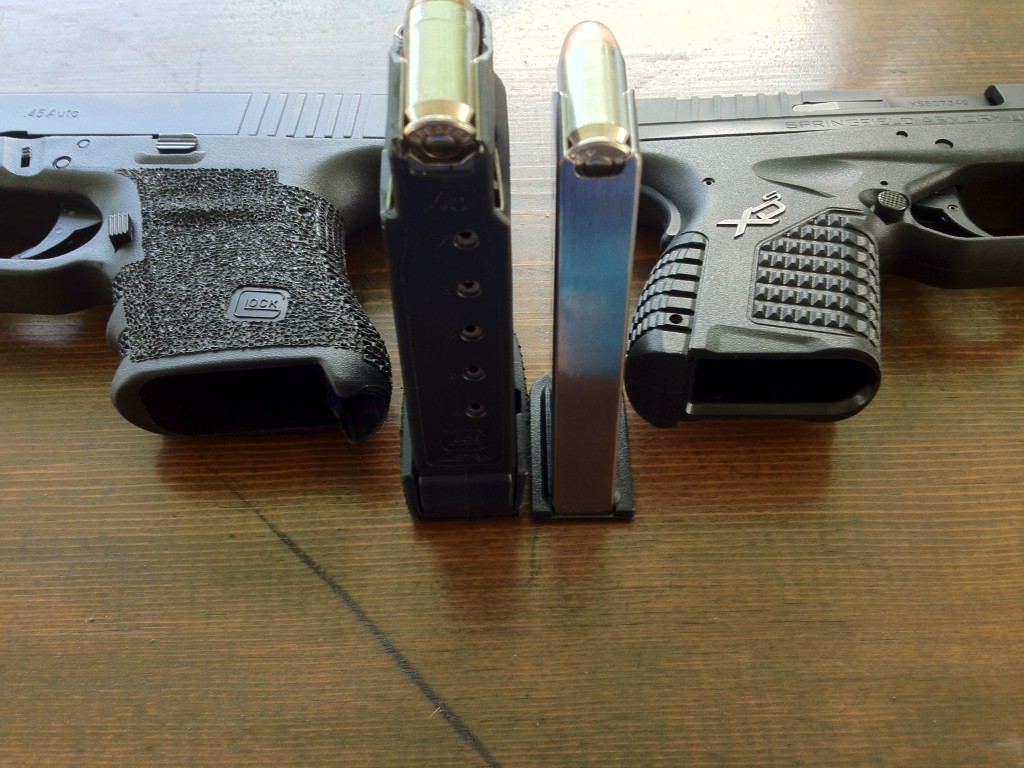 In 2004 the Rohrbaugh R9 came out.  A subcompact 9mm at $1,200 and with a limitation on how much you can shoot it before you expire the gun’s warranty.  It wasn’t exactly a hit. 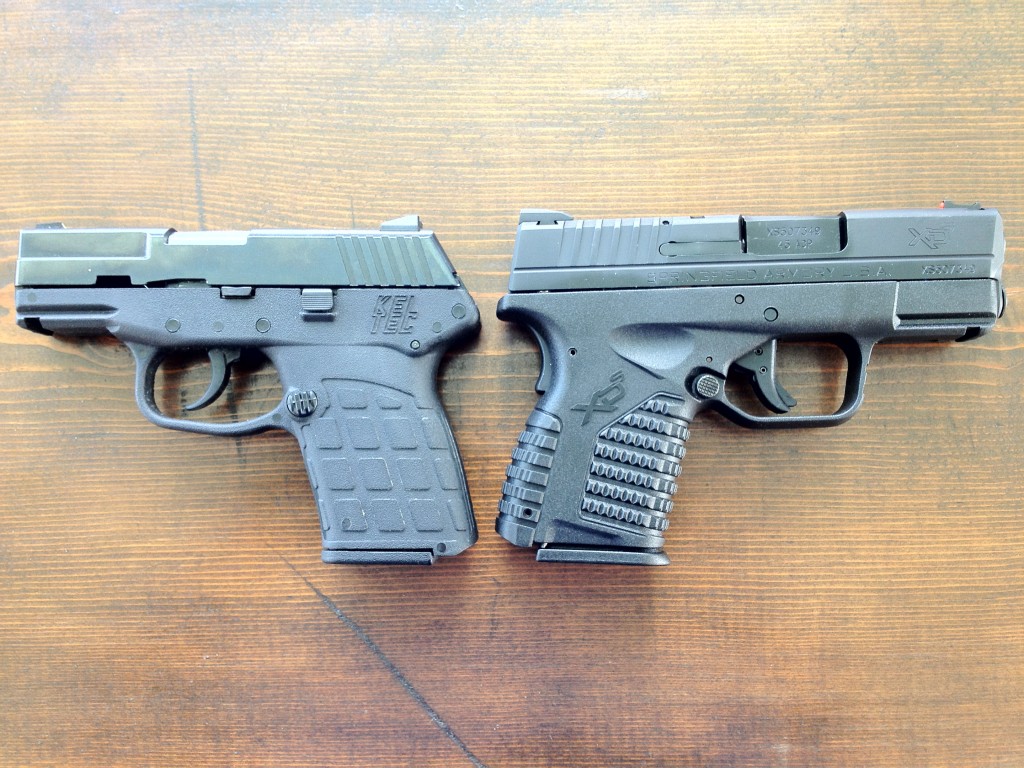 At its 2006 introduction the PF-9 was hailed as the only practical single-stack polymer handgun that brought a full-sized defensive caliber down to an easily carriable size.  That was perhaps a bit more sizzle than substance but it does fill its niche admirably.  However, there were always quality and reliability complaints.  Kel-Tec aficionados advocated the “Fluff & Buff”, long relied on for making the P-11 more reliable, to finish up the gun and reduce malfunctions.  Many people are a bit leery of grinding and polishing their guns with a Dremel tool.  Why can’t it just be reliable out of the box?  Despite this, PF9 sales have been stout and Kel-Tec is growing substantially with more innovative firearms hitting the market.

Walther entered the slim-line fray with the PPS in 9mm and .40 S&W in 2007.  This got a lot of notice for having a duty caliber slimline gun from one of the old guard manufacturers.  The PPS’s novel mag release and the mag itself are departures from the norm.  Also, the PPS doesn’t really follow the function of other Walther pistols.

The S&W Shield did follow form and function of Smith’s M&P lineup.  Chambered in 9mm and .40 S&W, the gun was also released in 2012.  This was arguably the last straw for Walther and S&W’s partnership for Walter’s US distribution.  The S&W Shield has been wildly popular so far and really Springfield’s only major competition in this slimline carry niche.  But there are still a lot of us Americans who still worship at the church of the .45ACP.

At SHOT show 2012 Springfield took the wraps off of the new XD-Slimline pistol.  Unlike previous XD offerings, this time the first article was chambered in .45

Many months later the new Croatian gun is shipping and stores just can’t keep the XD-S on the shelves. 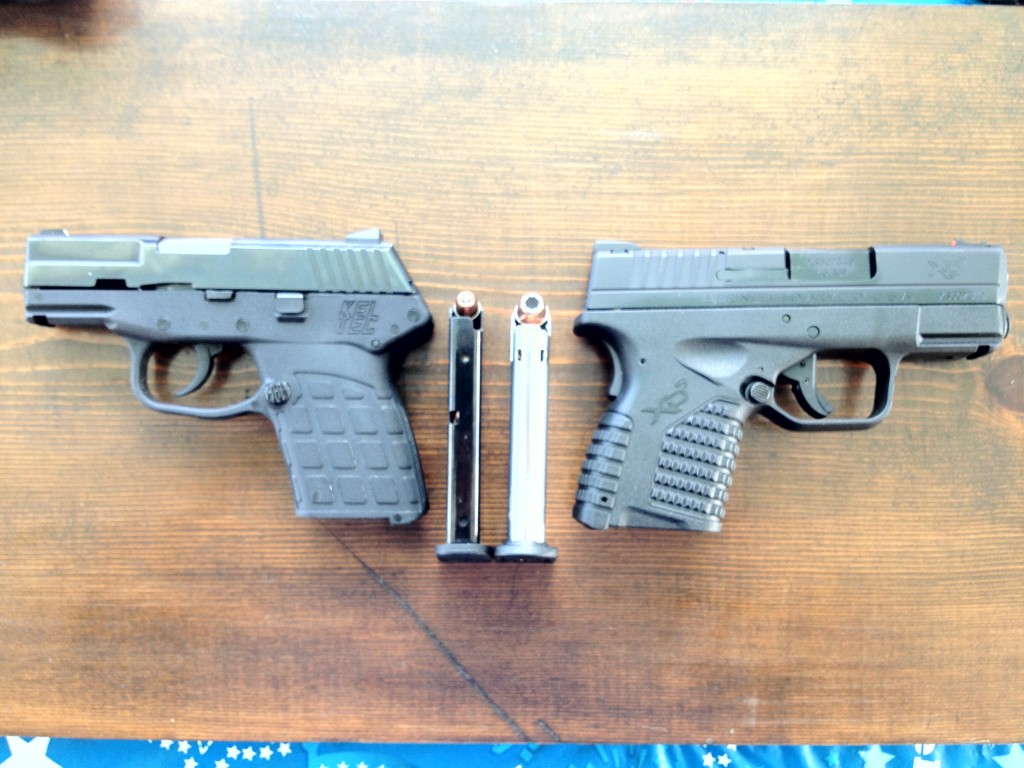 It’s roughly the size of the S&W Shield and just a little longer than the Kel-Tec PF9.  The Glock 36 is HUGE in comparison, although just a titch heavier. 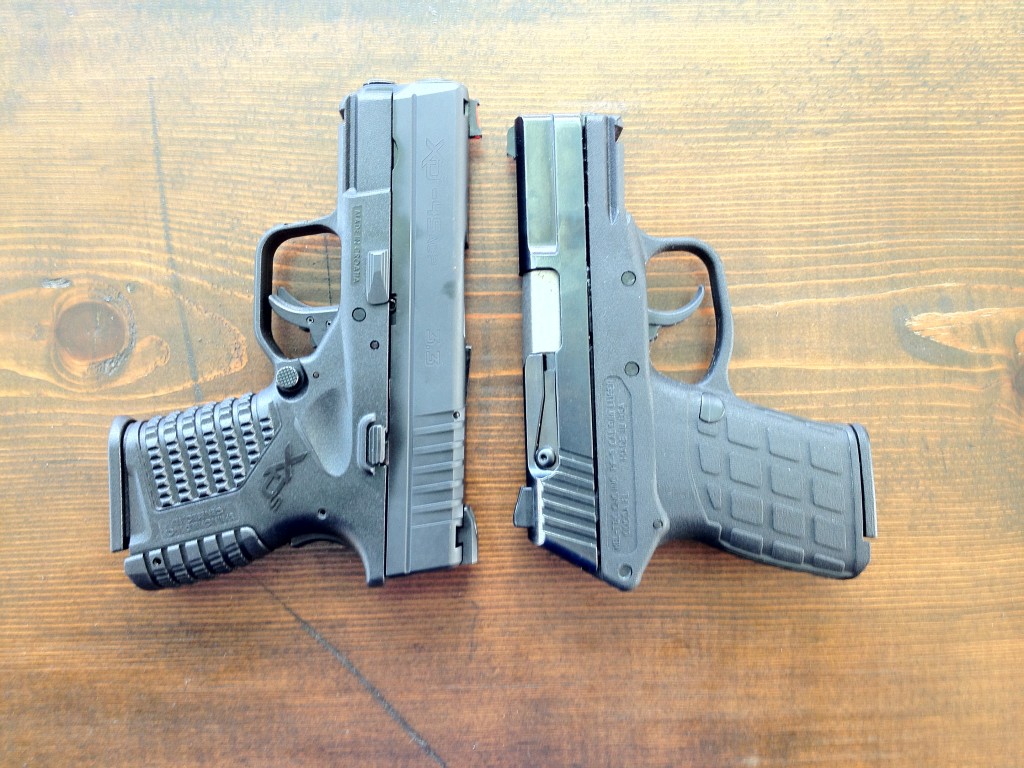 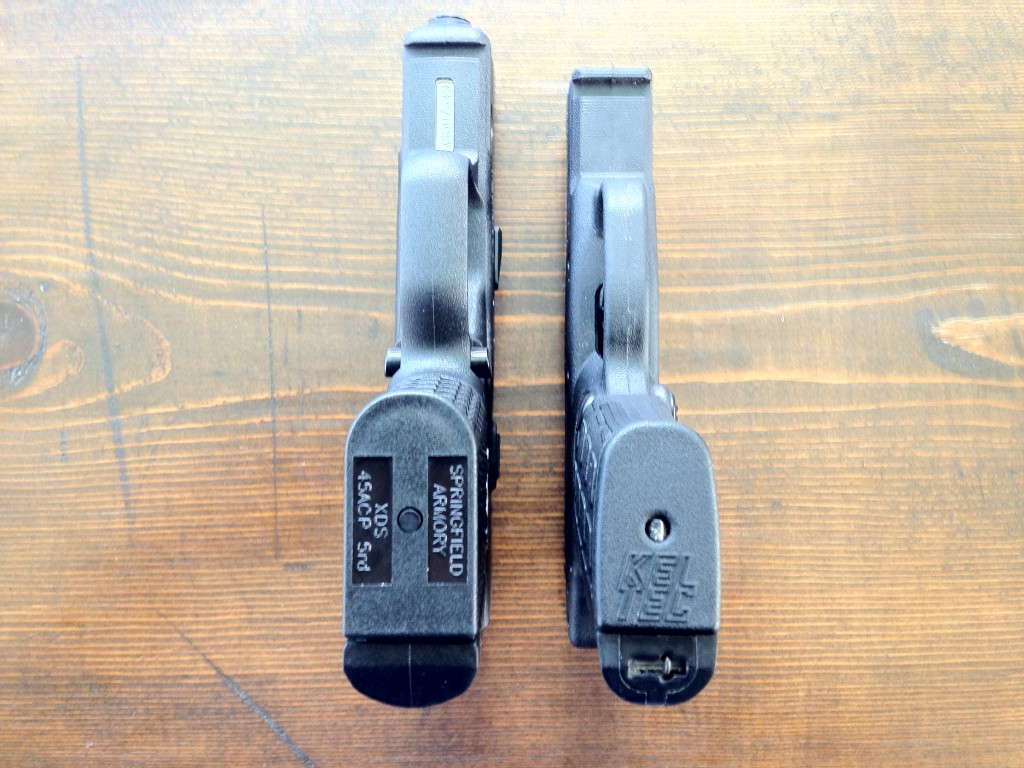 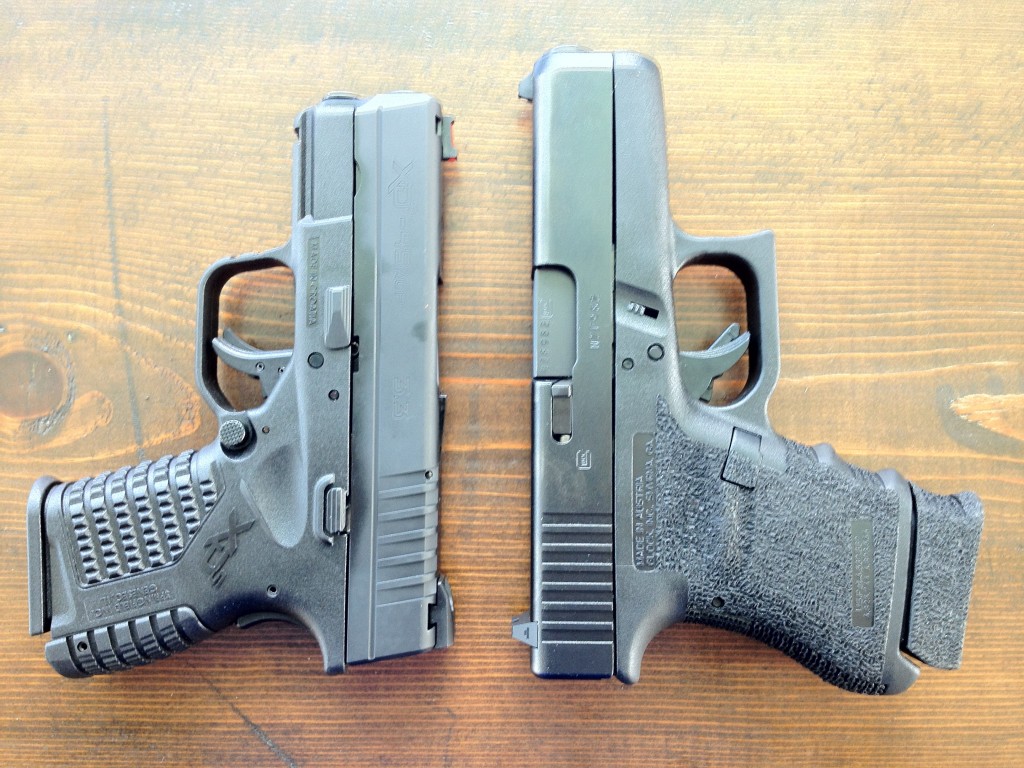 There are more subcompact and slimline guns coming out right now for the concealed carry market but nothing that I’ve seen in the vein of the XDS .45 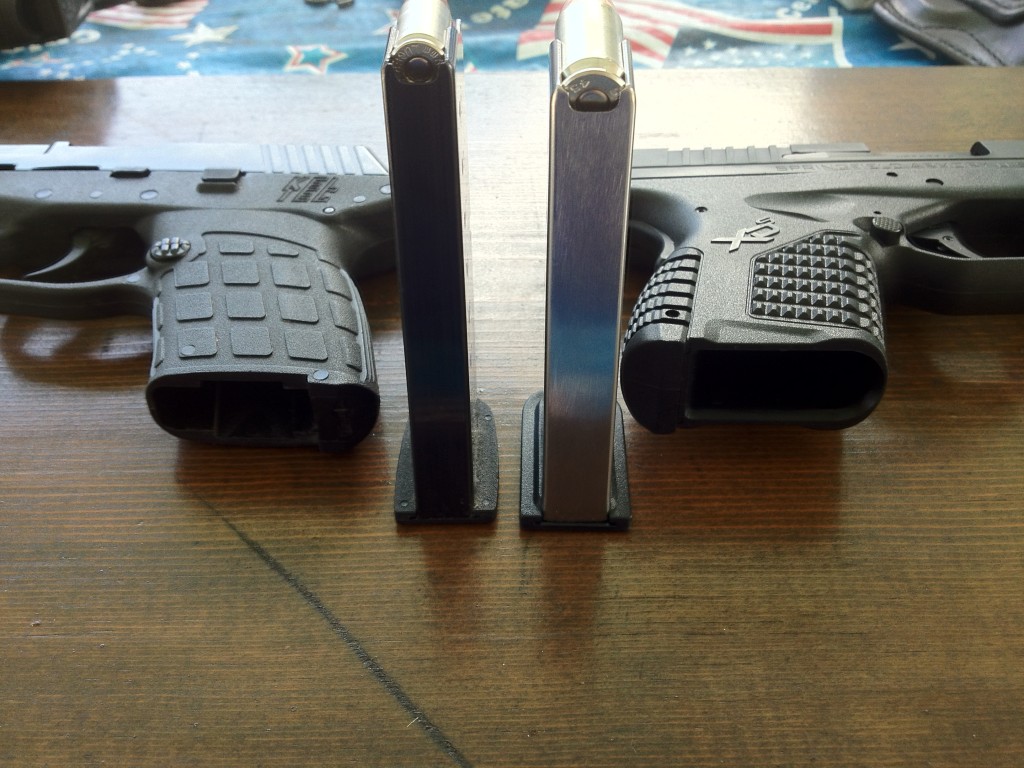 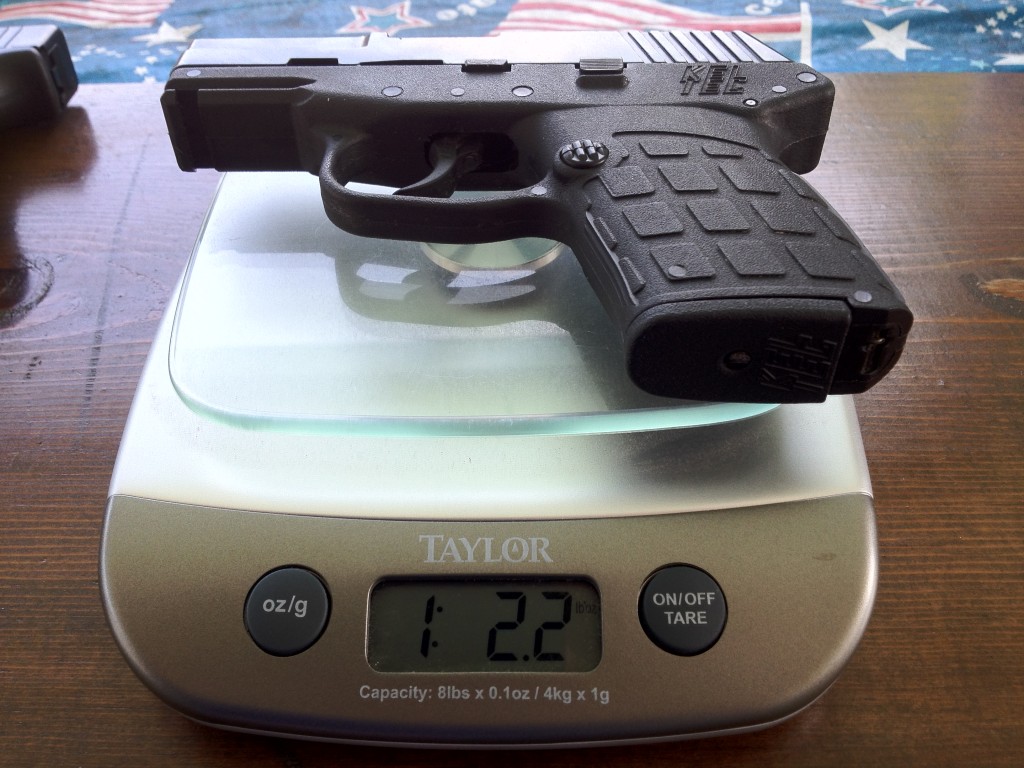 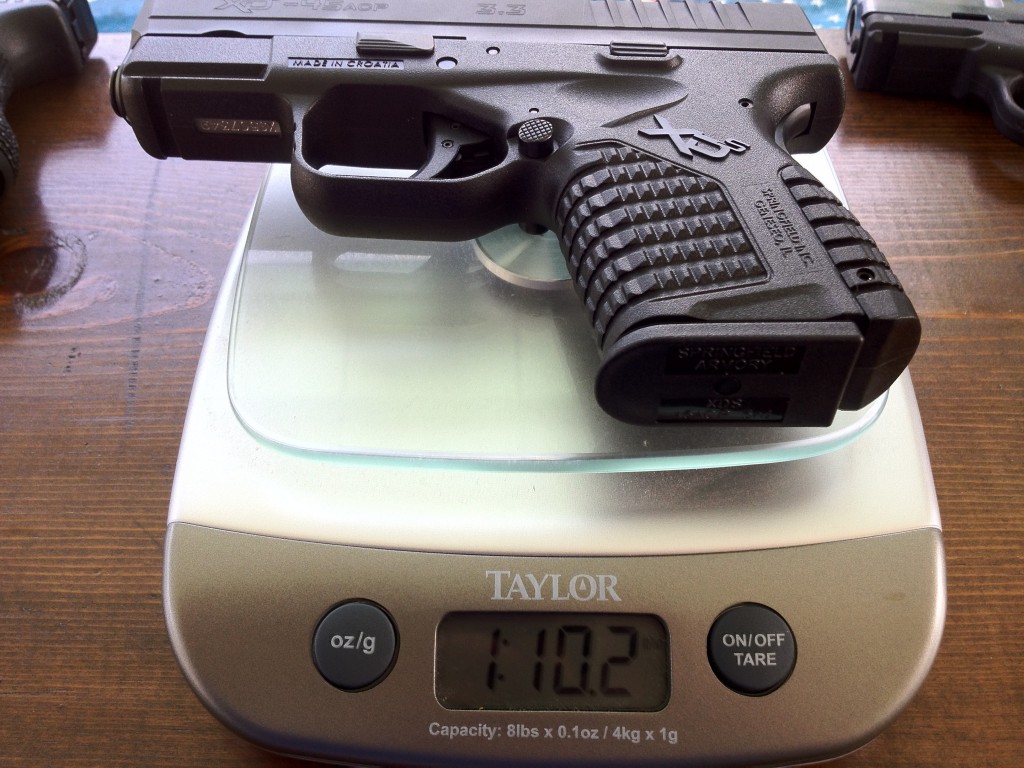 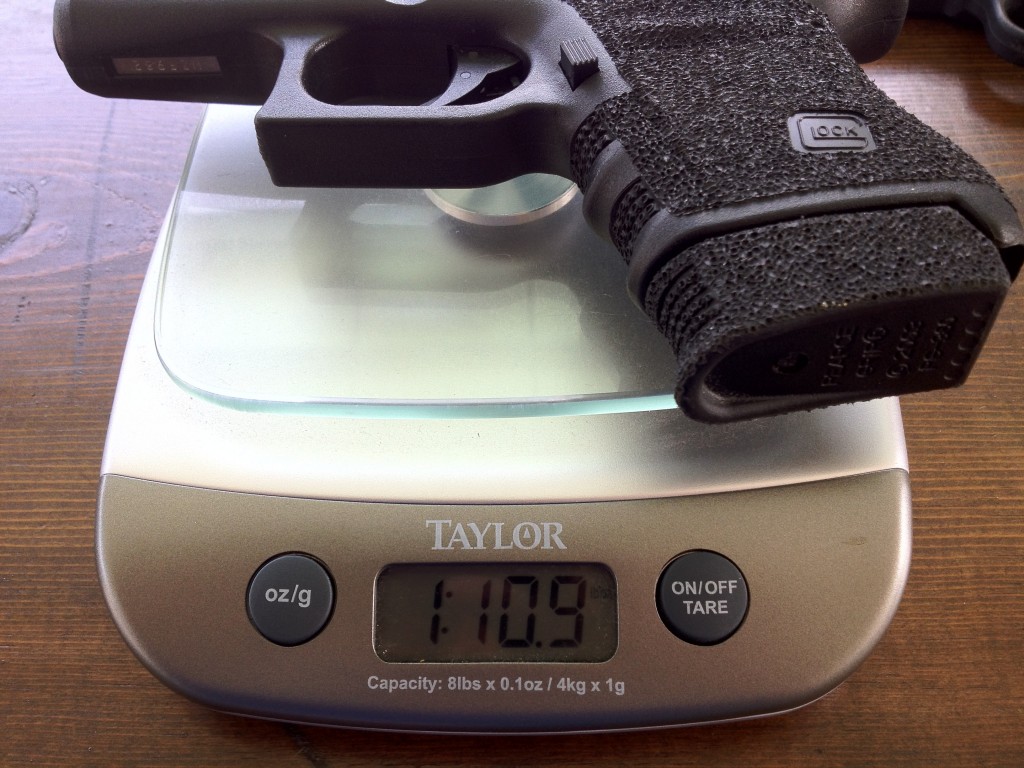 I’ll post more on shooting it later but this is for sure…  Purely from a comfort standpoint, if asked to shoot 500 rounds from the 9mm PF9 in a single day I would flatly refuse.  More than 50 rounds from the Kel-Tec hurts me.  The XDS?  No hesitation.  The G36 is just too big to even continue to compare.  They just aren’t really in the same class for concealability and size.

Overall…  This is my new summertime  EDC.

6 Responses to XDS 3.3″ .45 ACP Single-Stack – Springfield is the latest to pay homage to MiB’s Noisy Cricket