Florida Carry is standing up for the RIGHT to bear arms

Florida courts have clearly acknowledged that the carrying of a concealed firearm in Florida is a privilege not a right.

The “privilege of a license to carry a concealed weapon or firearm” recognized In Crane cannot replace, or substitute for, the fundamental right guaranteed by the Second Amendment or Article I Section 8 of the Florida Constitution.

Florida’s open carry ban is precisely the scenario that the Alabama Supreme Court warned against and the United States Supreme Court used as its justification for overturning the DC handgun ban.

“But the court say that it is a matter which will not admit of legislative regulation, and in order to test the correctness of its opinion, supposes one Legislature to prohibit the bearing arms secretly, and a subsequent Legislature to enact a law against bearing them openly; and then asks the question, whether the first, or last enactment would be unconstitutional. Under the provision of our constitution, we incline to the opinion that the Legislature cannot inhibit the citizen from bearing arms openly, because it authorizes him to bear them for the purposes of defending himself and the State, and it is only when carried openly, that they can be efficiently used for defence.” State v. Reid, 1 Ala. 612, 616-617 (1840).

It would be nonsensical for the United States Supreme Court to have found such persuasive support for its Heller and McDonald positions in Nunn v. State, Andrews v. State, State v. Reid, and State v. Chandler yet still reject the result of all of these cases that bans on open carry are unconstitutional.

In 2012, the NRA says that only Unintentional Open Carry needs to be legal for people who have the state issued license to carry concealed…

For all the good that the NRA does, and they do A LOT of good, for some reason the NRA still refuses to stand up for the RIGHT to Bear Arms.  Protecting those of us privileged enough to be able to afford the  license and attend a formal training session is now their only stated goal.  It’s a noble goal, but there is a fundamental right that continues to be denied.

St. Lucie County Judge Cliff Barnes will issue his ruling on motions to dismiss State v. Norman on the afternoon of Tuesday, August 14th. This is the case of a concealed carry license holder who’s gun became accidently unconcealed while walking in Ft. Pierce, FL in Feb., 2012.

This is the first case in the 25 year history of the open carry ban where a state prosecutor has chosen to not offer any form of deal.  Because Dale did a poor job of hiding his gun, the prosecutor is trying to put Dale Norman in jail for doing something that would have been legal for him to do in 43 states.  Something that was legal in Florida until 1987.

Regardless of result at the County Court level, the case will be appealed by either side.

I testified in this case about the history of Florida’s open carry ban, the legislative history of the changes made to these laws, the racist roots of Florida’s carry licensing programs, and the relevant court cases dating back to 1893, and the unconstitutional nature of the general ban on the Right to Bear Arms in Florida.

Florida Carry needs your help to strike down the Open Carry Ban and defend Dale Norman.  A decision that we will make sure stands to clarify and strengthen the right to bear arms outside the home. We will not rest until we are sure that no responsible, skilled, and law-abiding person is ever denied by law the fundamental right to bear arms for self-defense. 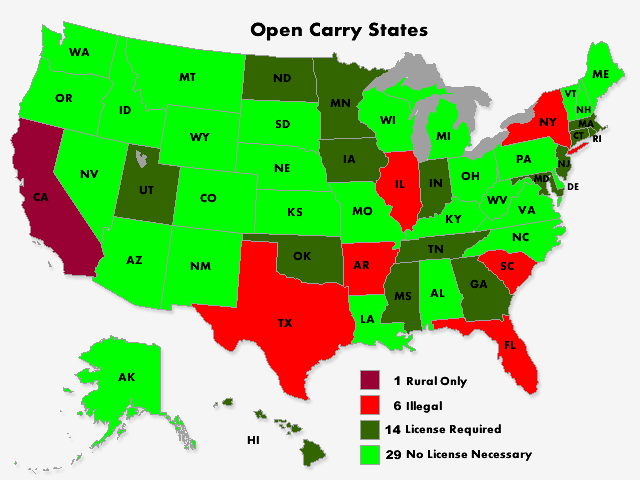