Why doesn’t everyone fly airplanes?

You have to meet 500 people before you bump into another pilot in this country.  I’ve been told that only 3% of colonist actually fought the revolutionary war, that 1% of bikers are outlaws, and 10% of Americans have a boat.

So why is it that only 0.2% of Americans get their pilot’s license?

It can’t be airplane purchase costs.
You don’t even have to buy an airplane.  Many private pilots just rent a plane when needed or, if you want to fly more, join a flying club to keep airplane costs down.  If you do decide to take the ownership plunge, I found 85 aircraft for sale under $25,000 today.  You can even partner with a friend to split the costs.  That’s what I did.  Airplanes can be financed up to 20 years so payments are very low. 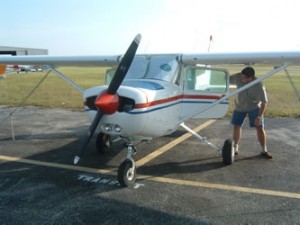 Here I am picking up my first plane.

It can’t be training costs.
With options for Sport Pilot and Private Pilot training we’re looking at $4,000 to $7,000 respectively.  This can also be financed quite easily.  I paid for my Private Pilot training by just paying as I went.  At the end of each flight I paid for the instructor’s fee and airplane rental.  I’m not saying that even $4,000 isn’t a lot of money, it is.  But let’s put this in some perspective.  In Germany it costs over $3,000 USD to just get a driver’s license.

It can’t be too hard.
As much as I would like to think that I an in the top 0.2% of the United States in intelligence, I’m smart enough to know that I must be somewhere (slightly) below that.  After all, I have not invented any cures for cancer, perpetual motion machines, cold fusion reactors, or even a better mouse trap.  Flight Training requires studying the books and practice in the plane, nothing more.  Anyone of reasonable intelligence can do it.

It can’t be too dangerous.
I often tell my passengers upon arrival at the airport that they should be feeling better now.  The most dangerous part of the trip is over, the drive to the airport.  I know this is debatable, there is still the drive home to contend with.  Like anything, flying is as risky as you make it.  If you drive like you have an angry badger in your pants all the time you are more likely to have a serious accident than your driver’s ed instructor.  The same goes for flying but there are some key differences.  If my airplane follows a big jet by under 6 nautical miles it is a “Loss Minimum Separation” and someone will be in trouble.  If you follow a big truck maintaining 2 seconds of distance, and another car passes beside you less than 5 feet away at 140mph closure rate, it is called driving carefully.  Which one do you think happens more often?  If my engine dies at 5000 ft I can glide about 12 miles in any direction to find an airport, beach, or a good field for landing.  If your car engine gives up the ghost you have to pull off to the side of a busy freeway and wait for rescue.  If I land on the same freeway with my aforementioned dead engine, everyone will stop.

I think it is really about making time and perception.
Most people work 5 days a week and do very little else Monday – Friday except watch the tube.  We are largely a large nation of large couch potatoes.  Then the weekend comes and we want to sit on the couch some more, go shopping, and eat potato chips.  The less lazy have other priorities.  Time off work is devoted to hitting the gym, hitting the bars, hitting the beach, and hitting on the opposite sex.  No time to hit the books or the airfield.

So, why don’t people make time?  Perception.
Nobody has shown people how rewarding, practical, and fun flying is.  How could we?  Every pilot in the country would have to take over 500 people flying in a small plane.  Airliners don’t count; that’s like showing someone what it is like to drive a convertible from the back of a greyhound bus.

Don’t knock it till you try it!
Many flight schools will let you take a “Discovery Flight” for about $60.  I even found one that will take you up for a 30 min lesson for free!

This entry was posted in Aviation. Bookmark the permalink.

2 Responses to Why doesn’t everyone fly airplanes?